I absolutely love teaching music the Musikgarten way!  2022 sees us start our 18th year of teaching and I’m thrilled that we have so many families who’ve made music a priority for their children.

But what about the families who want to make music a priority, but just can’t afford to?  One of the joys of having my own Musikgarten has been helping families by offering free tuition and scholarships.  Some people may be aware that I’ve been doing this, but up till now I’ve kept it low key, preferring to fly under the radar.

I opened the registered charity, Sonia’s Musikgarten Foundation, with the Hon. Christopher Finlayson as our Patron, because of a boy named Moala and what I’ve seen happening in his family.

Let me tell you about Moala.  Moala didn’t even want to learn to play the piano, but his father said he had to do it.  That was when he was 8 years old in 2006.  Today, he’s on a full 5 year scholarship to Scots College, where he came top in Year 9 music last year and this year he’s a prefect.  He’s achieved distinctions in all eight of his Royal Schools of Music exams, and he’s been asked twice and played at the Royal Schools High Scorers’ Concerts.

This is what achievement’s done for Moala.  His confidence has skyrocketed, he knows he can do it.  He’s proud of his achievements, he’s a leader, he’s focussed, he sets goals, he’s empowered.  He’s very humble and he doesn’t boast or brag.  (I brag on his behalf!)  Moala’s inspiring other children in Musikgarten and he’s inspiring his sisters and brother.  He has a whole new level of respect for education and he has an absolute direction in his life.  He can see his potential.  At 14 years old he’s very clear, he wants to be a surgeon, and there’s no question that he’ll get there.

I truly believe that each child has unlimited potential.  Any life they choose, they can have it and with Sonia’s Musikgarten Foundation we will extend our reach and help more children with our music classes.

I just wanted to use this opportunity to express how much joy we have attending the classes and we have highly recommended to all our friends.  In particular, I would like to thank Miss Sonia who has been our son's teacher. She has shown an incredible amount of compassion, and understanding for his unique challenges and taken him for who he is without any judgment. He still talks about her and will always remember her.  She is one of the people who does the teaching in such a natural way and her love for music has really been passed on to our son for life. 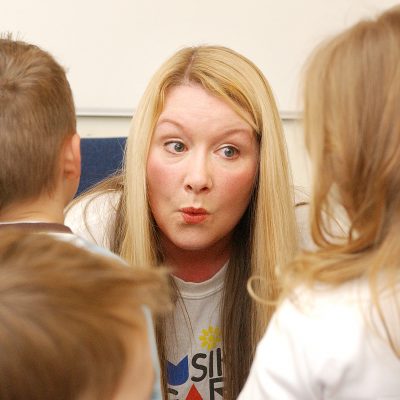 Come and join the fun.